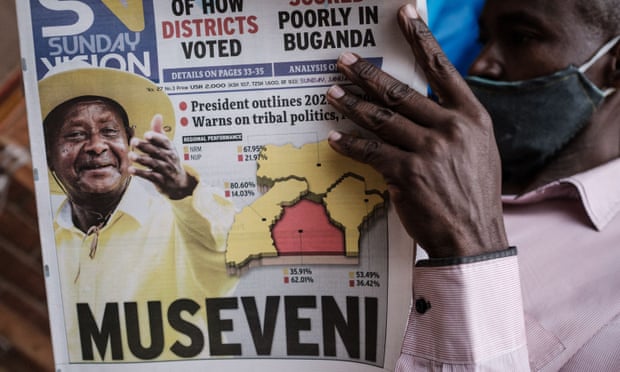 The party of the Ugandan opposition leader Bobi Wine says it is preparing to challenge President Yoweri Museveni’s election victory as it condemned what it called the house arrest of Wine and his wife.

Amid growing international concern about the conduct of the election, Wine said in an interview from his house, where he is surrounded by army and police, that he was “worried about my life and the life of my wife”.

Announcing the planned challenge to the results, Mathias Mpuuga, of Wine’s National Unity Platform, told a news conference: “We have evidence of ballot stuffing and other forms of election malpractice and after putting it together we are going to take all measures that the law permits to challenge this fraud.”

The continued confinement of Wine came as clashes between security forces and opposition protesters led to at least two deaths.

Museveni, 76, who has ruled Uganda without pause since seizing control in 1986, when he helped to end years of tyranny under Idi Amin and Milton Obote, claimed a sixth five-year term, extending his rule to four decades, according to official results.

In a generational clash watched across the African continent with a booming young population and a host of ageing leaders, the 38-year-old Wine, a singer turned lawmaker, posed arguably the greatest challenge yet to Museveni.

The clashes with police following the announcement of Museveni’s victory took place in a number of locations, including in Gomba, where Wine lives, and neighbouring Sembabule. They were quickly dispersed.

Wine, who dismissed Museveni’s victory as “cooked-up, fraudulent results,” remained under military house arrest on Sunday as his supporters called for his release.

Uganda’s electoral commission said that Museveni received 58% of the vote to Wine’s 34%, with a voter turnout of 52%.

The United States and Britain issued statements on Saturday calling for investigations into fraud reports and other concerns over the election as the top US diplomat in African raised questions over the integrity of the election.

“Uganda’s electoral process has been fundamentally flawed,” Tibor Nagy, tweeted, warning that “the US response hinges on what the Ugandan government does now”.

Museveni dismissed the claims of vote-rigging. “I think this may turn out to be the most cheating-free election since 1962 [when Uganda won independence from Britain],” said Museveni in a national address on Saturday.

Wine tweeted on Sunday that military units are not allowing him and his wife, Barbie, from leaving their house, not even to harvest food from their garden. “It’s now four days since the military surrounded our home and placed my wife and I under house arrest,” said Wine’s tweet.

“We have run out of food supplies and when my wife tried to pick food from the garden yesterday, she was blocked and assaulted by the soldiers staged in our compound.”

“We ask Ugandans to reject this fraud,” the opposition National Unity Platform said in a statement on Sunday. “A revolution of this nature cannot be stopped by a fraudulent election.”

The party said the prominent MP Francis Zaake, who had been arrested during an attempted visit to Wine’s house on Friday, had been admitted to hospital “badly beaten and brutalised” by security forces.

Ugandan officials have said the soldiers and police were there for Wine’s own security.

The opposition party said that its “quest for a free Uganda is on despite the current attack on free speech and association,” referring to the days-long shutdown of the internet by the government.

The party urged its followers to use every “constitutionally available avenue” to pursue political change.

“As we speak now, our president [Wine] is under illegal detention at his home,” Mpuuga told reporters at the headquarters of Wine’s party in Kampala.

“Perhaps his crime was to defeat Mr Museveni on the day he has selected as his crowning,” he said. “[Wine] is not allowed to leave or receive visitors at his home.”

Wine’s party alleged that soldiers had actually broken into his compound.

“We are concerned about the state in which he is,” a party spokesman, Joel Ssenyonyi, said of Wine. “Is his house now a barracks?”

Although Museveni stays in power, at least nine of his cabinet ministers, including the vice-president, were defeated in the parliamentary elections, many losing to candidates from Wine’s party.

Wine had strong support in Uganda’s cities, where frustration with unemployment and corruption is high.

The electoral commission deflected questions about how countrywide voting results were transmitted during the nationwide internet blackout by saying “we designed our own system”.

“We did not receive any orders from above during this election,” the commission chair, Simon Byabakama, told reporters, adding his team was “neither intimidated nor threatened.”

Tracking the vote was further complicated by the arrests of independent monitors and the denial of accreditation to most members of the US observer mission, leading the US to cancel its monitoring of the vote. 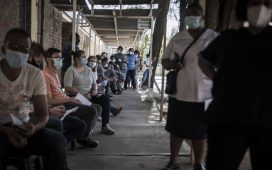 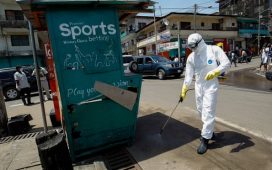 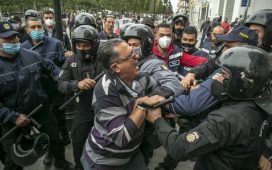 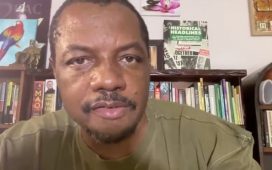 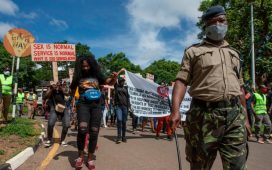 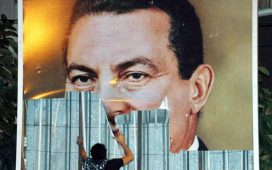