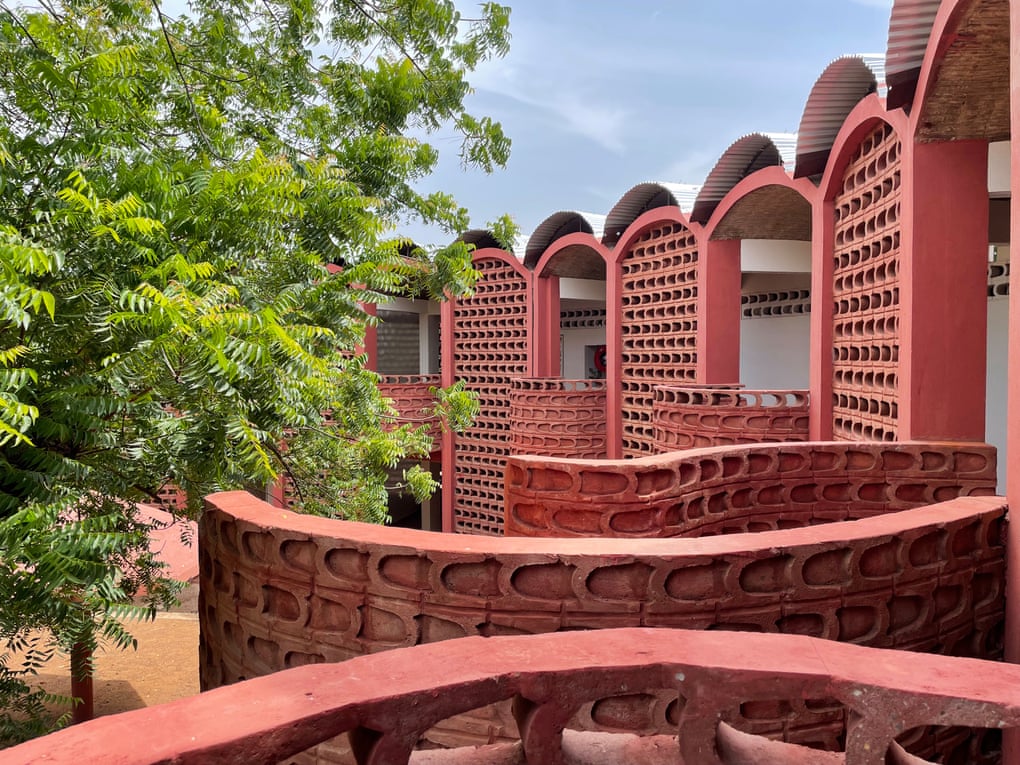 When Anni Albers began weaving at the Bauhaus in the 1920s, little did she know that her geometric patterns would one day adorn the doors of a hospital in rural Senegal. Shadows play across the surface of the staggered wooden blocks set into the doors of Tambacounda’s new maternity and paediatric ward, creating a woven effect echoed by the pattern of dappled sunlight streaming in through the perforated brick walls. These are small details, but they go some way to lightening the ordeal of being here, poetic touches that make the clinical environment feel like a place of care.

The art-world-philanthropy-complex works in mysterious ways. One hundred years since Anni and her husband Josef Albers met at the radical Weimar design school, the construction of a new hospital has been enabled, thousands of miles away, by the astonishing sums that their work now sells for, along with the fundraising power their name commands. Located in one of the hottest places on the planet, yet designed to function without air conditioning, the result is a building that aptly embodies the German duo’s philosophy of “minimal means, maximum effect”. And it happened almost by chance.

“It’s thanks to my dermatologist in Paris,” says Nicholas Fox Weber, the energetic American art historian who has run the Albers Foundation since Josef’s death in 1976. “One day he told me that he had started a small non-profit organisation to help hospitals in Senegal. I asked if I could go with him on his next trip. Six weeks later we arrived in Tambacounda with supplies: a suitcase full of blood and hundreds of toothbrushes.”

Fox Weber was appalled by what he found. In the maternity ward he was shown an “incubator” that consisted of a tray on a table, where three newborns were huddled beneath a desk lamp. Hypodermic needles were scattered on the floor, while an operating table was barely standing on three legs. Women lay crammed together at different stages of labour, or having just given birth, while others waited outside on bamboo mats on the floor.

What he saw led him to found Le Korsa, a non-profit organisation funded by the Albers Foundation (which itself is mainly funded by selling Albers paintings), dedicated to improving healthcare and education in eastern Senegal. Since 2005 they have built rural clinics, a women’s refuge, an arts centre and the first secular school in the strictly Muslim region, the latter two designed by Japanese-American architect Toshiko Mori. There are also plans for a new museum, with the architect to be drawn from an all-African shortlist. Four years in the making, the €2m (£1.7m) hospital building is their most ambitious project so far.

Winding its way for 125 metres in a serpentine curve, the two-storey structure is a surprisingly subtle addition to the 1970s hospital complex, creating the maximum number of rooms with the thinnest possible footprint. Rather than adding another doughnut shaped building to the campus of circular wards, it weaves between them instead, hugging the former paediatric ward on one side before curving the other way to enclose a new playground courtyard shaded by a mature acacia tree.

“We tried to create a model that the hospital could use for future extensions,” says Manuel Herz, the Basel-based architect behind the design. He had never designed a healthcare facility before, but he was chosen in 2017 after being the only invited architect to refuse to come up with a design without first visiting the site to properly understand the context. His previous research into modernist architecture in Africa helped to tip the balance, too. “It was crucial to come here and talk to everyone involved and find out what they really needed,” says Herz. “Our solution was to make the building as narrow as possible to encourage cross-ventilation, while creating as much space as possible for hanging out.”

Space for hanging out might not seem like an urgent hospital requirement, but, as Herz discovered on his research trips, a hospital stay in Tambacounda is very much a family affair. The campus sees people gathered on every possible surface, with patients’ relatives making food, washing clothes or resting on bamboo mats. It has the look of a chaotic campsite, with pots and buckets lying alongside stray cats, while newborn babies shelter under mosquito nets beneath the trees.

“It’s a big problem,” says Dr Thérèse-Aida Ndiaye, director of the hospital since 2016. “Each patient comes with four or five family members, who bring their own habits. I recently found one relative having a shower here. We are a hospital, not a house.”

They come out of necessity: there simply aren’t enough staff to provide every aspect of the patients’ care, so relatives are needed to pick up the slack, running errands and buying medication from the nearby pharmacy. Many have travelled miles to get here. Tambacounda hospital sees about 40,000 patients a year from all around the region, including from across the border from Mali, the Gambia and Guinea, with families often forced to travel together, unable to leave dependents behind.

Herz’s design embraces the inevitable entourage. Along with space for 150 beds, tripling the previous capacity, there are plenty of social spaces, including semicircular balconies off the first-floor corridor, with curved seating overlooking the playground so parents can keep an eye on their kids. Two spiral staircases descend gracefully into the courtyards, offering an alternative processional route to the more functional steps inside. The playground was the idea of Herz’s wife, Xenia, who suggested there should be laughter audible from the wards (and the couple helped to fund its construction with donations from their wedding guests). Herz says it is the first and only playground in Tambacounda – a city of almost 180,000 people.

The project’s most important lesson is in what it lacks: air-conditioning. Tambacounda gets swelteringly hot, reaching more than 40C (104F) in April, giving it the nickname Tangacounda, “house of heat” in the local Wolof language. It is located in the middle of the wide, flat, tropical savanna, where the air barely moves. But by using basic climate design principles – drawn from Maxwell Fry and Jane Drew’s 1956 book, Tropical Architecture in the Humid Zone – the wards can be kept cool with just ceiling fans (although air-conditioning is still required in the operating theatre).

The first trick is the double-skin vaulted roof, with a corrugated metal layer suspended above a concrete one below, creating a thermal buffer that helps to draw air up through holes in the ceiling. The walls are built from hollow concrete bricks that allow air to pass through, while being deep enough to shade the interior from direct sunlight. Rammed earth was considered, but Herz says it was safer to use a technique that local builders were familiar with, given other logistical challenges. The 50,000 bricks were made on site using a single mould, and dyed a reddish colour with iron oxide. Echoing the patterned doors, the exposed concrete ceilings were given a woven texture by sticking bamboo mats to the formwork.

“It’s important that everything was made locally,” says Herz. “The windows were all fabricated in a nearby metal workshop, and all the builders come from here. It means that all the money goes to the region, not to an international consortium, and they will be able to operate and fix everything themselves.” The more hi-tech foreign equipment that is imported, the more there is to go wrong – as the doctors have found, with a faulty new operating table and anaesthetics equipment that has delayed their move into the building.

The local production process also allowed further experimentation, which led to an unexpected bonus. At one point, Herz asked for a mockup facade to be built on site to test the effects of different sized holes in the bricks. Leading the construction process was Dr Magueye Ba, a medical doctor-turned-builder, who has overseen a number of Le Korsa’s projects.

Ba realised that a local village school was in need of a classroom, so rather than simply building a test wall that would be demolished, he made a little building for them, formed of several bays of the hospital. It stands proudly on the edge of the village, its jaunty roofline poking up from the grassy savanna, almost doubling the capacity of the school. Ba has since used the hollow bricks on another kindergarten project, their distinctive curved silhouette spawning something of a new local vernacular.

“It’s the perfect outcome,” says Herz. “I’m not in control any more – the design has taken on a life of its own.”

Nigerians were beaten for coming late to school