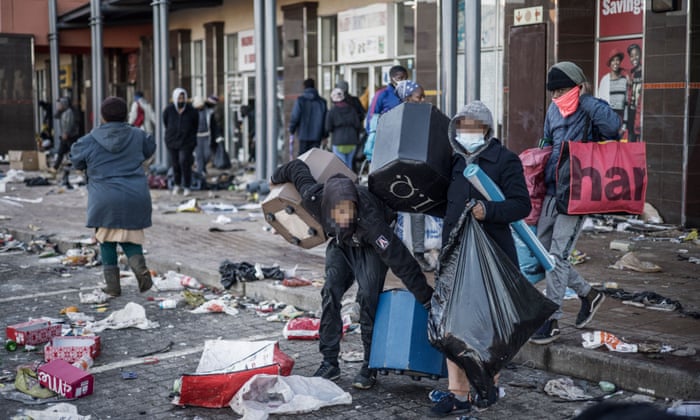 South Africa says it has put 10,000 soldiers on the streets and is calling up reservists for the first time for decades following days of looting and violence that have threatened food and fuel supplies across the country.

The death toll stands at 117, and more than 3,000 people have been arrested according to official figures, since the former president Jacob Zuma began a 15-month jail term, sparking protests that rapidly turned into a wave of looting of shops, malls and warehouses.

The unrest, which has been accompanied by attacks on communications facilities, roads and other critical infrastructure, has largely been limited to the provinces of Gauteng and KwaZulu-Natal, but has hit goods and services around South Africa.

Officials said on Thursday that the situation in Gauteng was calmer but remained volatile in KwaZulu-Natal, where 39 incidents were reported in the last 24 hours.

The number of troops deployed to reinforce overwhelmed police doubled for a second day running, to 10,000, a cabinet minister told a press conference.

The defence minister, Nosiviwe Mapisa-Nqakula, told parliament she had “submitted a request for deployment of plus-minus 25,000” soldiers to the president, Cyril Ramaphosa.

It is unclear when the reinforcements might actually be deployed, as the mobilisation will take weeks to take effect. A full call-up on this scale has not been attempted since the end of the racist apartheid regime in 1994, experts said. It is also unclear if there are sufficient reserves available to fulfil the minister’s request.

The government had been under pressure to increase the presence of security forces to reassure frightened communities across a swath of the country. Images of crowds of looters hauling away refrigerators, large televisions, microwave ovens and crates of food and alcohol have been a visceral shock for many South Africans.

Armed civilians have formed self-defence or vigilante groups in many of the worst-hit areas, setting up barricades and, in some instances, opening fire on suspected looters. A group of commuter minibus operators armed themselves with sticks and firearms on Wednesday and violently beat up suspected looters in the Vosloorus township in south-east Johannesburg.

Medics told the Guardian that emergency wards had been “flooded” with casualties with gunshot wounds. Health services in South Africa are already under massive strain as the country suffers a third wave of Covid-19 infections.

Other self-help groups have worked to protect and clean up shattered malls and other businesses, or to protect service stations.

The extent of the devastation is only now becoming clear. South Africa’s consumer goods regulatory body said that more than 800 retail shops had been looted, while in KwaZulu Natal, goods worth between $400m and $1bn have been stolen or destroyed, according to industry estimates. More than 200 shopping malls have been destroyed, damaged or looted.

President Cyril Ramaphosa met leaders of political parties and cautioned that parts of the country “may soon be running short of basic provisions following the extensive disruption of food, fuel and medicine supply chains”.

The state-owned logistics operator Transnet declared a “force majeure” on Wednesday – an emergency beyond its control – on a rail line that links Johannesburg to the coast because of the unrest.

In the port city of Durban, hundreds of people queued outside food stores hours before they opened as lines of cars also formed outside fuel stations. In Johannesburg, panic-buyers emptied supermarketshelves. In Soweto, bread was on sale from a delivery truck outside a large shopping mall as stores have either been looted or shut due to fears of vandalism.

The lootings have “seriously compromised our energy security and food security,” said Bonang Mohale, the chancellor of University of the Free State.

South African Petroleum Industry Association sought to reassure consumers on Wednesday, saying the availability of petrol and other related products in the country was stable.

Christo van der Rheede, executive director of the largest farmers’ organisation, AgriSA, said producers were struggling to get crops to market because of the logistical “shambles”. He warned that if law and order were not restored soon, “we are going to have a massive humanitarian crisis”.

Ramaphosa had initially deployed 2,500 troops at the start of the week to help the overwhelmed police force, before plans quickly changed to scale up the numbers to 25,000.

The deployment is extremely expensive, and an extra burden on South Africa’s faltering economy.

Some analysts have attributed the breakdown of order to factional rivalries within the ruling African National Congress party.

Zuma was ousted by Ramaphosa in 2018 and handed himself over to police last week to serve a 15-month jail sentence for refusing to appear before a judicial inquiry investigating corruption during his nine-year rule.

The jailing of the former president was a significant victory for Ramaphosa, who leads a moderate and pragmatic faction of the ruling African National Congress party.

There is some evidence that followers of the former leader instigated at least some of the recent unrest in a deliberate effort to undermine rivals, possibly opening a way to a return to power or at the very least protecting their economic interests.

Zuma’s core supporters say he is the victim of a witch-hunt orchestrated by political opponents. The 79-year-old former anti-apartheid fighter has hitherto remained popular among many poor South Africans, especially in KwaZulu-Natal.

The Nigerians were beaten for coming late to school

Russia is attempting to build its own ‘independent Internet’